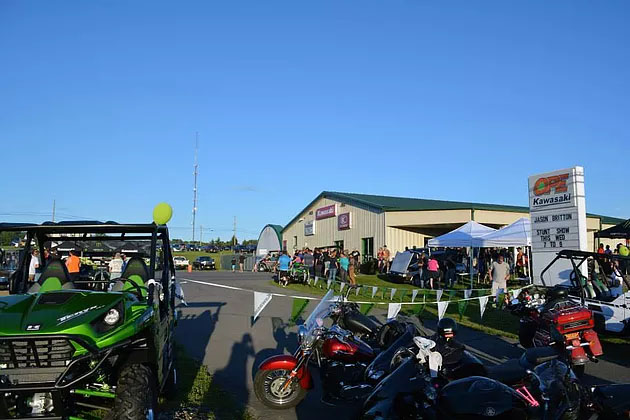 OPE Kawasaki is central New York’s only exclusive Kawasaki dealership, and the #1 Kawasaki dealer in their district. These guys have a racing background and are enthusiasts themselves, which means they get that this is a passion-based industry and truly understand what makes their customers tick. OPE’s biggest focus is making great connections with their customers and providing that ‘wow’ customer service experience. OPE is no stranger to direct marketing. In fact, they have historically done six direct mail campaigns per year with mixed results. One of the missing ingredients was focusing on the Right Message. Most dealers think that in order to drive sales, they have to have a sales event. The challenge with focusing your message on the sale, is that it alienates the 99% of folks who didn’t have, ‘buy a bike’ on their top 5 things to do this list week. Our message focuses on the party. By focusing on the event details at the party, you’ll still get those guys, you’ll just get everyone else too, plant seeds for future sales and hold higher margin since you won’t be discounting. We all know your customers are like kids in a candy store once they’re in your store, so get them there, show them a good time and impulse purchases will happen. This is exactly what OPE focused their message on for their last event. Jason Britton came and performed a stunt show at the end of the day, they had food, demos, and even more.

Steve, OPE Kawasaki’s General Manager said, “We’ve been in business for 11 years, and this was the best event we’ve ever had. We have to credit the Powersports Marketing team and the support that you guys provided…it helped make it a greater success!” How

great? Steve said, “We had over 500 people show up. It was packed from when we opened until we closed. There were motorcycles parked all up and down Route 5, the main drag that goes up and down in front of the dealership. The lawn in the back of the dealership, every inch of it was packed with cars. And it was the media that you produced, how it went out, the schedule it went out on.” He particularly loved the impact of the recorded call blast. When it went out they, “…developed a ton of fans and a few haters, but that’s ok. Our phones rang back for probably an hour and 45 minutes! The whole staff helped answer the phone.”

Steve continued, “We didn’t just end up having a large crowd show up for the free stuff, we did a mountain of business over the counter. I think we sold 4 machines and planted a ton of seeds.” 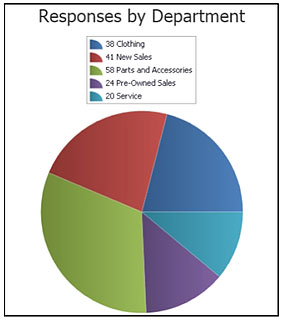 OPE Kawasaki ended up having 214 completed surveys, which generated a total of 181 sales opportunities in Parts & Accessories, Service, Apparel and included 65 new and pre-owned unit sales.

Steve said the leads were awesome and helped contribute to the residual impact of the campaign. He said, “I don’t always expect to seal the deal the day of the event, but the two weeks after the event, we killed it in sales. Not only were our numbers up, but our margins were up! When does that happen?”

These guys are creating affinity with their buying base by executing a consistent marketing plan by hitting the Right Target Audience with the Right Message. The other key to their success, was not hitting them with just one media channel (direct mail), but strengthening that direct mail with two integrated emails, an integrated call blast, event signage, web banner, fliers, and survey site. All this combined media gave their customers many more opportunities to respond, which drastically increased their response rate. Sent out at just the Right Time before the event, and you’ve got a winning formula.

October means Halloween! Tie a themed party like Halloween to the secret sauce of the Sharp Shooter Program and its scary how well it works. Halloween kicks off the 4th quarter, a time where consumers spend more than 90% of their annual discretionary budget. It is your job to capture as much of that revenue as possible and keep these folks out of the big box stores. By starting early, you plant seeds for Black Friday & Christmas. Don’t miss this opportunity to make a huge impact in your 4th quarter numbers. Check out the inserts for a few more proven winners. To have Powersports Marketing build your dealership’s Buying Base and put a FREE plan in place to hit them consistently, call me on my direct line at 877-242-4472 ext: 112 or chat us up at powersportsmarketing.com. Happy selling!