A Picture is Worth a Thousand Words

Ask Tory: Business has fallen off the past couple of months and we’re down; any tips on boosting sales?

SEO and Reviews Combined Will Boost Your Site Rankings

Case Study - Events from this Week

It’s hard to believe, but by the time you read this, Memorial Day will be right around the corner and the industry will be escalating into full-swing, summertime madness. Hopefully, your 1st quarter wrapped up nicely, 2nd quarter is going strong and you have your eyes set on some lofty 3rd quarter goals. If you’re like many of our clients, you’ve recently finished up a big Spring Open House, Armed Forces Day Event, or you’re looking forward to a Memorial Day Campaign.

It’s no secret that word of our success has traveled throughout the industry. In 2014 alone, (January-April) we’ve already worked with hundreds of dealerships and earned many success stories from our clients. This has made it extremely difficult to pick just one dealership to highlight in this article. So, I thought why fight it? Let’s share a few! Here are just a handful of incredible success stories from the last few weeks:

These guys just finished up their ‘Spring Open House’ and said it was the “Best Event in 15 years of ownership.  We SOLD 25 units on Saturday alone, and lined up a ton more.  Ran out of hot dogs and hamburgers in the first two hours, and bought over 500!  It was a great turn out as usual, fantastic event.  You guys Rock!”

Calumet H-D® just finished up their ‘Have a Fling with Spring’ campaign and the results were ridiculous. They said, “We sold 8 units Saturday with more working and broke records for single-day sales in EVERY single department. Motorclothes & parts were just insane. Haven’t seen lines at the registers like that in years! There was a HUGE crowd and everyone was really excited about the event and all the marketing. It was a major success!” There were 1013 surveys completed, which created a total of 979 sales opportunities in P&A, Service, and riding gear, PLUS 145 responses for a new or used bike! They’re continuing to sell units from the leads generated as this article goes to print. 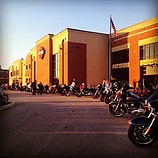 At their ‘Spring Bling’ event, the GM said, “There was a huge crowd! We had lines at every register all day long and rolled several units. Now that the traffic has left, the guys are eager to get started on all the new and used unit leads!” They have plenty of leads to go around. There were 1777 survey responses, including 265 people looking for a new or used Harley-Davidson. This equates to a 13.8% response rate and generated over 1,000 P&A, Motorclothes and Service Leads!

As you’re probably aware, the Sharp Shooter Program focuses on the four fundamental components of marketing which are 1) Identifying the Right Target Audience 2) Surrounding them with the Right Media Channels 3) Hitting them with the Right Message and 4) Executing the campaign with the Right Timing. When you combine these four components, a couple of really fun things happen; you drive a ton of qualified traffic to an event at your dealership (your customers and your competitor’s customers), and you generate a pipeline of leads for every department of the store…which is exactly what happened for the dealerships listed above. If you’ve missed out on the first part of the season, don’t worry, there are plenty of great reasons to market to your base the rest of the year. The best part of the riding season is just getting going and you can celebrate the kick-off to Summer with Backyard BBQ’s,  a 4th of July Event, Stunt Shows, Demo Days, Sizzlin’ Summer Events, Dog Days of Summer Parties and a whole lot more! Need help planning June and the rest of the year? Call me on my direct line at 877-242-4472 ext: 112 or chat us up at powersportsmarketing.com. We’ve got hundreds of designs and campaign themes that have proven to be effective in every corner of the country and we’re eager to help. Happy selling!